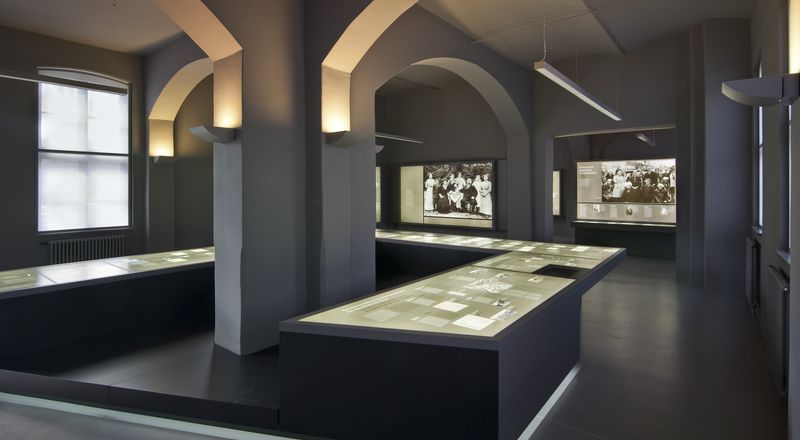 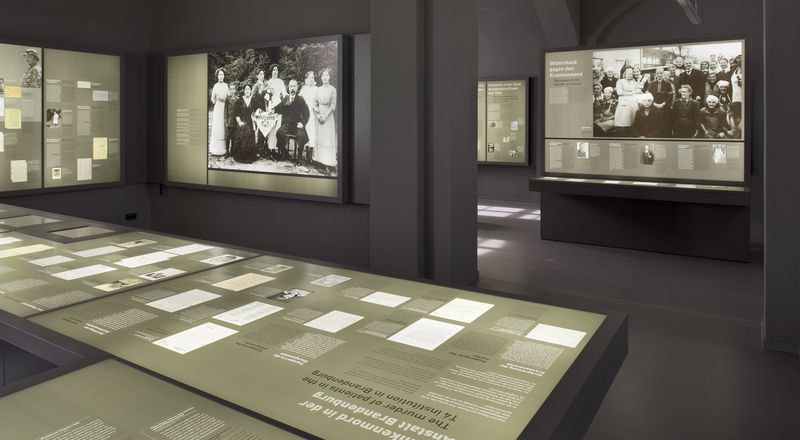 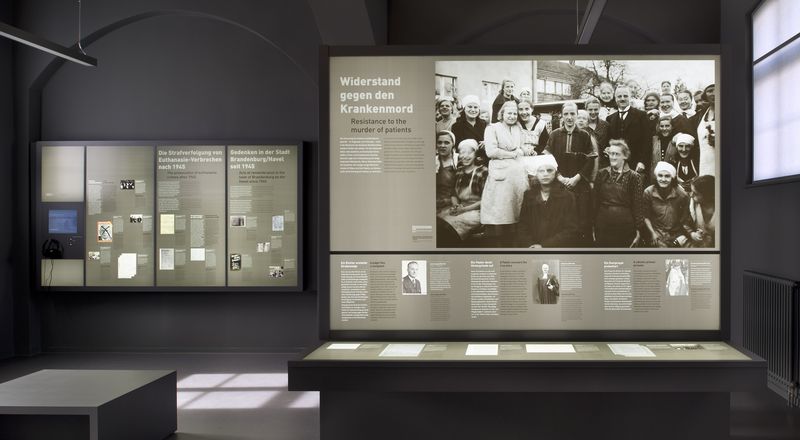 "The Euthanasia Institution of Brandenburg an der Havel"

The Memorial’s permanent exhibition, which opened in August 2012, addresses the murder of more than 9,000 sick and disabled persons from psychiatric hospitals in northern and central Germany, including Berlin.

The exhibition begins by exploring the historical foundations of Nazi euthanasia and racial hygiene policy in propaganda posters and writings about eugenics. In Brandenburg in January 1940, a decision was made, at a “trial killing,” to conduct mass murder by using gas. Testimony from people involved, which is presented on a monitor, provide evidence of this.

The procedure of the murders

The exhibition then moves on to the technical and organizational procedures of the murders. The calendar of the physician who supervised the killings, Dr. Irmfried Eberl, documents the timing and planning.

The first victims in Brandenburg were mentally ill criminals. The exhibition also emphasizes the euthanasia killing facility’s significance as a place where systematic mass murder was practiced on Jewish patients. The largest group of those murdered in Brandenburg were people with a broad array of psychiatric diagnoses and disabilities, as well as social outcasts. Children from the nearby facility in Görden were killed in the gas chamber in Brandenburg an der Havel for research purposes. The exhibition includes a publication from the year 1948 that shows how the research results were used after the end of the war.

The biographies of about 30 victims have been recreated on the basis of photographs and documents from their families. A commemorative book contains the names of more than 8,200 victims who have been identified.

The next section of the exhibition documents resistance against the murder of the ill. Several state and municipal offices, companies and individuals knew about the euthanasia operation. However, there was scarcely any opposition in Brandenburg and the region; open resistance remained the exception. Only a few courageous individuals, such as Lothar Kreyssig, a guardianship judge at the Brandenburg district court, used their knowledge and their position to prevent the delivery and murder of patients.

A touch screen enables visitors to examine the biographies of several of the total of 70 individuals who were demonstrably involved in the killing facility: physicians, nursing staff, police officials, SA and SS men, administrative, management and domestic staff. Some of the staff were put to work after the euthanasia murders in the death camps of “Operation Reinhardt” in the Holocaust. The connection between the euthanasia murders and the Holocaust is the subject of the next section.

The exhibition concludes with an examination of the prosecutions for the killings after 1945 and the history of commemorations in Brandenburg an der Havel after the end of the war.